Directories are one of the most effective ways of tracing members of a family, especially tradesmen. Many small businesses needed to ensure the public was aware of their activity and one of the better ways to do this in an age before media dominated was via a directory. The value of directories as a research tool is enhanced when no census material is available. The directories include many pages of advertisements, which all provide useful information, often including names of people and places.

Researchers are likely to find names and addresses listed in the following sections:

Names and addtional information can be found in:

This years the directory contains the following sections which lists the names, addresses and professions of many in New Zealand in 1900. It also includes a street guide for some of the major towns and separate directories for banking, public companies, medical, legal, ecclesiastical, educational, pastoral, municipal and government.

This edition of Wise's Post Office Directory for New Zealand is divided into three main sections, enabling the enquirer to see at a glance the Householders or Traders in any one town; the business and address of any resident in the colony; and the firms throughout New Zealand engaged in any trade or profession.

Separate directories are given in the following areas: 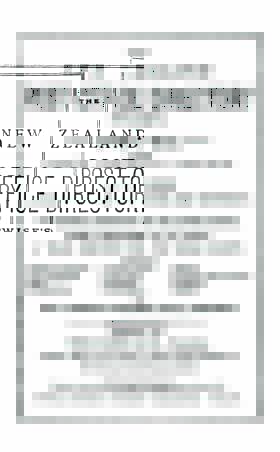