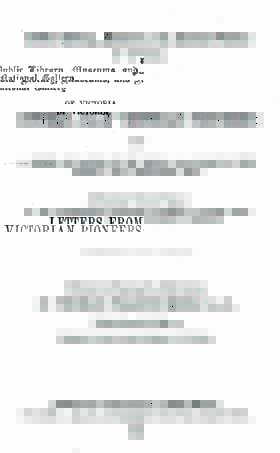 Were your ancestors Victorian pioneers?

. T. Bride. 1898. In 1853 Lieutenant-Governor La Trobe addressed a circular letter to a number of early settlers requesting information as to the time and circumstances of the first occupation of various parts of the colony. This book is a collection of those responses to that circular.
The 58 letters record events which will recall to many persons still living old Victorian memories, and will have a great value for the future historian of Victoria, as narrating the experiences of actual movers in the early scenes of our colonization, while they will also possess interest as incidental contributions to the biographies of the men who half a century ago began to encounter the hardships and perils which beset the pioneer in every part of this continent.

"These papers also contain interesting contributions to our knowledge of the aborigines, their languages, customs, and conflicts with the white men; and although some of the incidents narrated have found their way into print before, they are now for the first time given in their entirety to the public."

This is an invaluable genealogy resource for anyone exploring their Victorian family history or building a family tree.