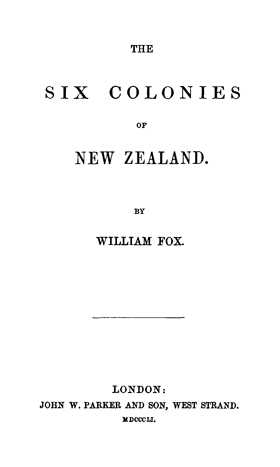 Do you have New Zealand ancestry?

Sir William Fox (1812-1893) was an explorer, businessman, politician and author. He was one who helped shape the New Zealand Constitution Act of 1852. He also served as the nation's Prime Minister for a period.

After emigrating to NZ with his wife in 1842, Fox became editor of the 'New Zealand Gazette' and 'Britannia Spectator'. He became an agent for the NZ Company the following year and its Principal Agent in 1848. His lobbying in England (1851-52) was probably responsible for the addition of Taranaki to the five original provinces in the Constitution of 1852, which granted self-government.

Published in 1851, this book is Fox's description of the events leading up to the Constitution. It gives statistical and descriptive accounts of each NZ Colony, as well as details relating to the Maoris, and Government, both current and proposed ideas.

Fox's leading role as an explorer, NZ Company agent and one of the first colonial politicians gives this book an authority and pungency lacking from so many other contemporary accounts.

It's an invaluable genealogy tool for anyone searching their family history or building a family tree.