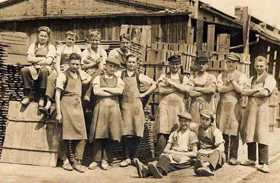 Do you have ancestry in the Queensland Public Service?

This database of 65,369 entries lists the name, present office, location, date of birth, date of initial appointment, and the date, page and Volume reference in the Queensland Government Gazette (or Blue Book for 1870-1879) for officers employed in the various departments of the Queensland Civil and Public Service between 1864 and 1948.

Lists indexed include Civil Service from:

Further information provided in the Gazette/Blue Book may include the salary (and various allowances), the date from which the salary was received, the date of appointment to present office, and whether under Public Service Acts or excluded from Acts. Qualifications, where appropriate are also recorded. Many entries provide additional information about the officer in footnotes - some explaining the allowances received (for example, Mileage allowance for use of own motor car (9d. per mile)) and others relating to previous positions held.

This is a valuable genealogy tool for anyone exploring their ancestry or building their family tree.