EMIGRANTS FROM HAMBURG TO AUSTRALASIA 1850-1879 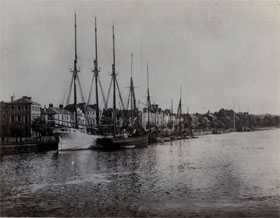 Do you have European ancestry?

This dataset is a great genealogy resource if you're exploring your family history or building a family tree. It provides a searchable index to all available departure lists for ships from Hamburg to ports in Australia and New Zealand during the period. The database records the name, former place of residence, age, occupation, ship, destination and departure year for more than 40,000 emigrants between 1850 and 1879.

Passengers on all ships to Australia and New Zealand are listed; they include emigrants destined for all states in Australia (except Western Australia) and ports in both the north and south islands of New Zealand. It includes passenger lists for which no Australasian records exist. It is an important resource for family historians and those with a more general interest in migration from Germany, Denmark, Sweden, Norway, Switzerland, Italy and other European countries.

The departure lists are those which shipping companies were required to submit to the Hamburg authorities of all emigrant passengers on ships leaving Hamburg with 25 or more passengers. As the emigrants left Hamburg, their names and details were recorded in a series of registers. From 1855, a list was kept for each ship and appears to record the passengers in the order in which they boarded the ship.
Prior to 1855, however, the details are recorded in a series of lists, one list for each letter of the alphabet. Within each list, the passengers are recorded in family groupings along with the former place of residence (or sometimes the birth place), an occupation (usually only for adult men), the name of the ship and its captain, the number of the voyage within the year, and the date of departure. Unfortunately, in the family groups, it is often only the husband who is named, the rest of the family being described as wife and 3 children from 2 to 7 years, for example.

In general, if a ship carried fewer than 25 emigrants no copy of the departure list was kept. Sometimes, the newspaper reports which were printed at the time of arrival provide names of some of these passengers missed by the Hamburg lists.

Although various listings of immigrants to Australia already exist, family historians have often had a difficult or tedious task locating the immigration details of those of their ancestors who arrived from Central Europe. On the Hamburg lists, some details are written in the old German script; this has denied many researchers access to this useful information. Further, the emigrant lists give the former place of residence and occupation of the passengers, items rarely provided on many Australian immigrant lists.
Much work has gone into the transcribing, indexing, and checking of the information. The town names have been checked as much as possible against several gazetteers and maps, and discrepancies noted. Unfortunately, no one gazetteer has a complete listing of all the localities from which our ancestors originated - there have been some clearly written place names which have proved impossible to locate.