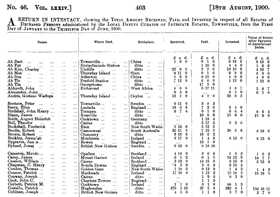 The Curator of Intestate Estates and his deputies were required by the Intestacy Act of 1877 to publish a return twice each year in the Queensland Government Gazette of all the estates administered by them during the preceding six months. Although the Act required the returns to be published in the Gazette in January and July, they were actually published in a variety of months but rarely in January or July. On occasions the return for one or more divisions was not listed at all for the half-year.

This database is an index to these returns in intestacy for Queensland during the period 1896 to 1916 - listing a total of 31,347 entries. Aliases, where listed, have been indexed. Although the half-yearly returns commenced in 1877, this index covers from 1896 since from that year additional information on the deceased person was provided in the returns.

"What information can I find on this index?"

This collection includes only transcripts of entries found in the Queensland intestacy returns index.

Each result may offer the following details about your ancestor’s entry: