Government Gazettes contain a vast amount of historical and genealogical information. However they are largely an untapped resource. The few complete runs that are available are usually only found in major libraries. And even for researchers who do have access to these the sheer size and extent of the Gazettes is daunting.

Tens of thousands of ordinary people and localities, small and large, are mentioned EVERY YEAR in Government Gazettes. But they offer researchers much more than simply names and places. They will help you reconstruct events and circumstances in the life of individuals and communities.

Government gazettes for a particular locality eventually become standardised with the type of material listed. In the 1870s you can expect the Government Gazettes to include the following information that will usually list names and sometimes name of emigrant vessel, addresses and/or occupations:

Gazettes are published by governments and their agencies as a means of communication to officials and the general public. As such they are useful, not only to monitor the actions of the government, but also as far as family historians are concerned, they are valuable primary source documents. 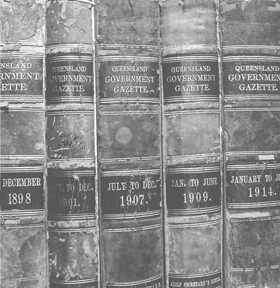