BANK OF NSW (ROLL OF HONOUR) 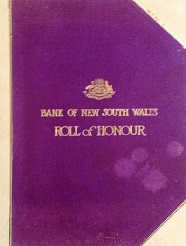 Did any of your ancestors work for The Bank Of New South Wales?


In World War One, many businesses not only actively encouraged their employees to serve their country, but proudly made extensive records celebrating those who did. This set contains information about the staff members of the Bank of New South Wales who served in the First World War, having enlisted in the 'British' armies (which included Australia and New Zealand). The bank had 793 officers enlisted from every branch in Australia, New Zealand, Fiji, Papua New Guinea and London, out of a staff of 1750 men - almost half the bank's entire male staff population.

This is the history of each of those men. Each officer is listed together with:

• a photograph
• full name
• rank
• the battalion they served in

There are various other biographical details, too - as well as information on their overall military history. It's a great genealogy tool for you to uncover your family history.

Were your ancestors of religious faith? Don't forget to search our extensive Churches & Religion Records