AUSTRALIAN CONTINGENT: HISTORY OF THE PATRIOTIC MOVEMENT IN NSW

Building your family tree? This is a must for anyone with a family ancestry involved in the Australia (New South Wales) Contingent in the Soudan War from March to June 1885 or the NSW Patriotic Fund that supported it. It includes both information about the battle itself, plus a listing of 'Subscriptions to the Patriotic Fund' which gives personal and business names, as well as the amount paid to support the fund by each contributor. 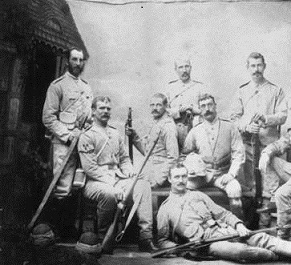 HISTORY OF THE CONTINGENT

The contingent, an infantry battalion of 522 men and 24 officers and an artillery battery of 212 men, was ready to sail on 3 March 1885; leaving Sydney amid much public fanfare. Support, however, was anything but universal, and many viewed the proceedings with indifference - or even hostility. The nationalist Bulletin ridiculed the contingent both before and after its return. Meetings intended to launch a patriotic fund and endorse the government's action were poorly attended in many working-class suburbs, and many of those who turned up voted against the fund. In some country centers there was a significant anti-war response, while miners in rural districts were said to be in 'fierce opposition'.

The contingent finally arrived back in Sydney on 19 June, 1885. Originally expecting to land at Port Jackson, the decision was now made for them to disembark at the quarantine station on North Head near Manly, as a precaution against disease. Five days after their arrival in Sydney the contingent, dressed in their khaki uniforms, marched through the city to a reception at Victoria Barracks where they stood in pouring rain as a number of public figures gave speeches, including: the Governor, Lord Loftus, the Premier, and the commandant of the contingent, Colonel Richardson. It was generally agreed at the time that, no matter how small the military significance of the Australian contribution to the adventure, it marked an important stage in the development of colonial self-confidence and was proof of the enduring link with Britain.

Were your ancestors of religious faith? Don't forget to search our extensive Churches & Religion Records