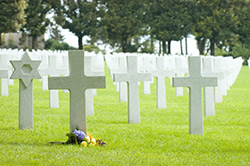 The United States has a storied history of conflict, tragedy and triumph ranging from the American Revolutionary War to the Persian Gulf. This Memorial Day is a time to remember the millions of men and women who served for this country.

The U.S. Veteran's Gravesites contains 7.6 million death records of people who served or are related to those who served from 1760 until 2011, and are buried in various Veterans Affairs (VA) National Cemeteries, state veterans’ cemeteries, or other military cemeteries.

The massive casualties of the Civil War spurred the first national military cemeteries in 1862. Soldiers and veterans were typically buried in private, public, church, national, and military cemeteries, still others never left the battlefield or were placed in hospital or prison cemeteries.

Headline about the Gulf War posted in the Ukiah Daily Journal in 1991.


This military collection is especially useful for family historians who do not know specifics about an ancestor, such as a birth date, which branch of the military the ancestor served, or rank of a veteran.