“There is no substitute for victory.”
--General Douglas MacArthur, a letter leaked to the press in March 1951 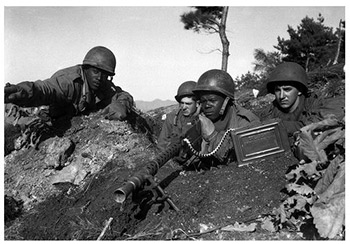 The clash stemmed from the issue of communism and marked the beginning of the Cold War. More than 3 million people lost their lives, although it is often called “The Forgotten War,” overshadowed by World War II and the following Vietnam War.

Unification negotiations only intensified tensions in the months leading up to the Korean War. Battles initiated in 1950 with North Korean leader Kim IL Sung invaded South Korea in an attempt to unify the country under Communist rule. 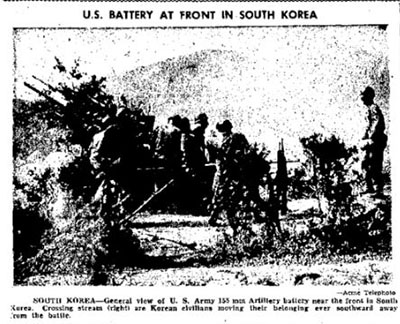 The image is of U.S. forces a the war front of South and North Korea was taken is from findmypast.com's U.S. newspaper archives

Joseph Stalin, leader of the Soviet Union, backed the North Korean invasion under the belief the United States would not engage in Korean Conflict. However, U.S. air forces were well prepared to focus an attack against the invasion at President Harry Truman’s command.

Within two days the U.S. came to the aid of South Korea, and laid its sights ultimately on China by deploying 5.7 million soldiers, although actual numbers vary and official casualty numbers are poorly documented.

The conflict resulted in a balancing act between UN forces driving into North Korea, and Chinese soldiers pushing back over the 38th parallel. Cease-fire negotiations started after one year of fighting, although it took two years and Stalin’s death before any agreement could be decided. Twenty-one nations provided troops, ships, aircraft and medical teams to South Korea.

The UN signed an armistice with North Korea and China on July 27, 1953 after 4,000 tons of bombs dropped, and 3.5 million international military personnel were found dead, missing or wounded. More than 2 million civilians were killed and napalm decimated the total of North Korea and border areas of the South.

Image is taken from the Mt. Vernon Register, Indiana, from findmypast.com's collection of U.S. newspaper archives

South Korea refused to sign a peace treaty, so the North and South never officially ended the war which continued into the 21st century. The border between the two countries is almost exactly the same as before the war started.

Also, the so-called “Cold War” nuclear tensions between the Soviet Union and the U.S. continued until the Limited Nuclear Test Ban Treaty was enacted in 1963 to ban nuclear weapon tests in the atmosphere, outer space and underwater. A total of 2,057 nuclear tests have taken place since 1945.