NZ's part in the war at sea

The naval history of New Zealand is not widely known even within New Zealand. At the outbreak of the war the only warship in New Zealand was the old cruiser HMS Philomel which had been sent to New Zealand to form the nucleus of a naval force. She arrived in mid July and was quickly back in action under Admiralty control.

Photo to right of HMS Philomel at sea crica 1914.

During the First World War the New Zealand government focused on maintaining the New Zealand Expeditionary Force formations in the Middle East and Western Front. There was no effort on the Government's part to recruit men or form a naval force in 1914-1915. Therefore the story of the naval war is one of individuals and a sequence of events. It is believed that approximately 500 New Zealanders served in the war at sea with the Royal Navy or the Dominion navies. The first New Zealander to be killed in action was Able Seaman John Reardon who was serving in the submarine HMAS AE1 that went missing on patrol off the Duke of York Islands on 14 September 1914.

With the outbreak of war the New Zealand Government was asked as a loyal Dominion to seize the German colony of Samoa. HMS Philomel escorted the Samoan Expeditionary Force that occupied Samoa by the end of August. Philomel then returned to New Zealand and escorted the first New Zealand Expeditionary Force to Fremantle then detached and spent the rest of her war in the Red Sea. She returned to New Zealand in 1917 and was tied up at Wellington. After the war she would be towed back to Devonport to serve as a depot ship.

Photo to right of Charles Palmer.

There were no local naval forces but that was solved at the outbreak of the war when Charles Palmer strode into the Auckland Headquarters and offered his services to "defend Auckland from the Hun". The enthusiastic amateur's offer was accepted and the Motor Boat Patrol service was formed using private launches. This remained in operation until the end of 1915.

The Naval War reached New Zealand waters in 1917 when the raider SMS Wolf laid mines which sank two merchant ships. Amazingly it was not until a message in a bottle from a POW on the raider was found that the New Zealand government realised that the raider visited our waters. In 1918 and 1919 three trawlers were taken up for service as minesweepers. 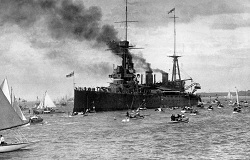 The gift battleship, the battlecruiser HMS New Zealand formed part of the battlecruiser fleet and she fought at all the major battles in the North Sea. When she arrived in New Zealand to an adoring public in 1913 the commanding officer was presented with a tiki and piu piu [grass skirt] with the advice this was to be worn by the commanding officer when the ship was in battle. True to his word Captain Halsey wore the piu piu at Heligoland Bight and Dogger Bank and New Zealand did not suffer any damage.

Photo to right of HMS New Zealand arriving in Auckland in 1913. 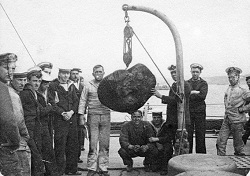 At the battle of Jutland the commanding officer could not wear the piu piu but the ship was still lucky. Unlike her sister battlecruisers that were sinking New Zealand was able to fire the most rounds of any British warship but she also was hit in one of her turrets but suffered minor damage. The piece of the turret that was broken off by the German shell is in the collection of the Navy Museum. A New Zealander Lieutenant Alexander Boyle was in command of that turret. He and a rating climbed out of the turret and moved the 500kg piece of armour so that the turret could be brought back into action. In a letter home describing the battle he compared naval combat as being tied to a chair while rocks were being thrown at you.

Photo to right of shrapnel from the HMS New Zealand.

To counter the U-boat threat the royal Navy created the Q-ship service. These were disguised vessels armed with guns that would attract a U-boat to the surface and then open fire on it hopefully sinking it. One of the most famous of the Q-ship commanding officers was Lieutenant-Commander William Sanders. He was awarded the VC in April 1917 for his action against U-93. He was killed in action in August of that year. He is the only New Zealander to have won a VC for naval service.

Wybrants Olphert also served in Q-ships and accounted for a U-boat was subsequently captured. He was the only New Zealander to be a naval POW during the war. Frank Worsley, who had won fame for his Antarctic adventures, joined the Q-ships when he returned to Britain. He also sunk a U-boat.

Charles Palmer would also play a role in the recruitment of New Zealanders for naval service. In 1916 he assisted in recruiting New Zealanders to serve with the RN Motorboat Patrol Service as temporary wartime officers and senior ratings. About 200 New Zealanders volunteered and went to Britain to be trained. They spent 1917-1918 serving with the Coastal Forces some in motorboats and others in minesweepers. During the raid on Zeebrugge and Ostend in April 1918 a number of New Zealanders took part in the supporting forces. Roy Alexander from Auckland was serving in a Motor Launch and was awarded the DCM for his actions at Zeebrugge. He was badly wounded and died in August 1918.

Other New Zealanders served with the Royal Naval Air Service [RNAS] that flew over the Western Front and from seaplane tenders. Three of men became 'aces'. Euan Dickenson survived the war and had 14 confirmed kills. Harold 'Kiwi' Beamish flew fighters and was credited with 11 confirmed kills. Thomas Culling shot down six aircraft before he was killed in action in June 1917. Another section of the RNAS was the Armoured Car Service. This unit served on the Western Front, Middle East and in southern Russia. A number of New Zealanders joined this unit and served with it until war's end.

After the Armistice the New Zealanders were demobilised from the Royal Navy and returned to New Zealand as individuals unlike their Army counterparts. We still did not have a naval force but in a small way the nation made a contribution to the war at sea that so influenced the outcome of the war on land.


Michael Wynd is the Military Historian at the Navy Museum. He maintains the largest collection of naval history and is responsible for carrying out all the research tasks for both the public, government agencies, and the NZDF. As a military historian, his research interests include the First World War, 19th Century Colonial Warfare, New Zealand's naval history, The Royal Navy in New Zealand, and the Revolution in Military Affairs. He has completed a Master's degree on the Demobilisation of the 1st New Zealand Expeditionary Force and is working on a Doctorate on the New Zealand Division on the Western Front 1916-1918.