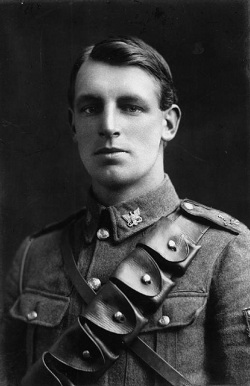 Although the composition of an army division would change later in the war, in 1914 the infantry element consisted of three infantry brigades, each brigade composed of four battalions, and each battalion numbering approximately one thousand officers and men. The component parts of the Australian & New Zealand Division were as follows:

Photo to right of Sergeant George Tinsley Thompson who was killed in action at Gallipoli on 7th August 1915 aged 24.

4th Australian Brigade (commanded by Colonel John Monash)
The 1st, 2nd and 3rd Australian Brigades, all raised in August 1914, formed the infantry element of the 1st Australian Division. Like these first three brigades, the 4th Brigade was also Australian in composition and was raised in September 1914. The men in this brigade were formed into the following battalions.

14th (Victoria) Battalion
Raised in Melbourne and trained in the Broadmeadows area of the city. Most of the men in this battalion came from Melbourne and its suburbs.

New Zealand Brigade (commanded by General Alexander Godley)
Recruiting for an infantry brigade of men from New Zealand was conducted on a territorial basis with preference being given to members of existing Territorial Regiments. As the History of the Canterbury Regiment, NZEF 1914-1919 states:

"It was decided to send two battalions from each island--one from each of the principal provincial districts; and the geographical situation of the Territorial Regimental areas made it possible to allot four Regiments to each battalion, for the purposes of recruiting."

Unlike the Australian battalions which were numbered sequentially, The New Zealand battalions were not numbered but rather named after the places from which their recruits had come:

Field Company, New Zealand Engineers
Landed on the afternoon of the 25th April.

ANZAC Corps Troops
The 7th Indian Mountain Artillery Brigade comprised the 21st (Kohat) Battery, the 26th (Jacob's) Battery, the Second Indian Field Ambulance, and the Second Ammunition Column and Supply Detachment; around 800 men altogether. The 26th Battery landed on the 26th April and immediately went into action. It would be the last artillery unit to leave Gallipoli.

Ceylon Planters Rifle Corps
A force of eight officers and 229 other ranks commanded by Major J Hall Brown whose role was to perform operational duties for ANZAC headquarter staff.

Paul Nixon's paternal grandfather, maternal great-grandfather and countless great uncles and second cousins served their King and Country during the First World War. Paul's interest began in the early 1980s when he interviewed and corresponded with scores of surviving Great War veterans in southern England and the Midlands and subsequently published research on the community of Chailey in Sussex between 1914 and 1918. In recent years, Paul has studied recruitment patterns in the British Army in depth and is considered an expert in regimental numbers between 1881 and 1918. When he does not have his head buried in a military database Paul is the attentive father to three small children, and the loving husband of a long-suffering wife.