Not Just At A Wall 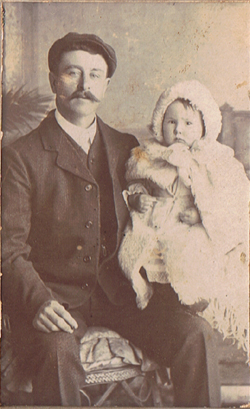 I wrote this poem while I was trying to discover what happened to my great-grandfather's body/grave in World War One. The first part was written at the beginning of my research into Thomas Rutherford (service number: 5207) while the second part was written after I had finished my research and found his grave -- in a farmer's field. I intend to write a third part after the 100th anniversary of his death as I along with the families of the other soldiers buried with him will be at their burial site in France.

Not Just At A Wall

As I stood there staring at the battlefield long gone,
Trying my hardest to see the attempts of the failed attacks,
The ghosts of 90 years ago came to me.

They came with sadness of dreams and hope long lost,
But they smiled with the possible future to come,
Of heartache undone and tears of commemoration at their graves,
Not at a wall or at a fading picture.

Their eyes tell me of the hope they have for me,
The hope that I'll give them a final peace,
The hope I'll give it to all their families.

A sadness comes to me of all those families,
Long gone who will never know.
That their father, brother, uncle, grandfather,
Had a final burying place,
Not just the air or some field long forgotten.

A place of peace, not just a name on a wall,
And an eternity wondering,
With no place to rest their heads.

A silent promise was made that day,
I will never rest until...
They can be commemorated at their graves,
And NOT JUST AT A WALL.

Part 2
Time has pasted since that silent promise,
Heartache, hope, tears, tantrums, despair and paperwork have come and gone.
All that is left is a sense of almost completed -- almost there,
All that is left are pictures and coordinates on a map.

I can see the silent promise coming true,
I can see the weariness of the long years of wondering coming to an end,
For those long lost soldiers and their families.

They know where we are now -- they say --
They shed tears for us now on our graves,
NOT just at a wall.

I came in search of a man I will never know,
Just a name on a page,
Just a face in a picture,
-- yet?

I found this group of soldiers,
Who started life so separately,
Who only shared a state they lived in,
Who inturn shared life for just a blink of an eye,
Who now share death for eternity.

I found a group of soldiers,
I found one man,
They all led me to a place I never dreamt I would go,
They led me to one of the greatest gifts ever...

The following is a poem I found amongst my grandfather's photographs and documents he kept from his service in World War Two. He (William Westrupp, Service number: 9275) served for New Zealand. My dad told me that my pop was amongst the first wave to enlist in New Zealand and that these men were not treated well by the public. The poem matches really well to what my pop went through (and other men like him). The poem was typed using a typewriter. The title given was 'The Forgotten Legion' and no author was included.

The Forgotten Legion
Author Unknown
We were first when our country called us,
Gladly we answered the need,
Holding it light and a pleasure,
To come with our utmost speed.

We asked not why we were wanted,
Or where they wished us to go,
The fact that there was danger,
Was all we needed to know.

The others so cool and cautious,
Declaimed and sought delay,
And, while the camp life claimed us,
Awaited a distant day.

We toiled, sweated and studied,
Alike in the wind and rain,
Then off on leave to forget it,
And back into camp again.

We asked no acclaim or worship,
Such things we loathe and despise,
But we are only human,
You passed us with scornful eyes.

Then came the word we were wanted,
We were bound for distant shores,
And we were suddenly heroes,
And subject of much applause.

There was a rush to join us,
The cry was "Follow The Flag",
Worthy, splendent and excellent,
But why was there such a lag.

Those others so shrewd and cunning,
Had counted the loss and gain,
And settled the balance even,
To be sure it was not in vain.

We went home on our final,
To see our people once more,
A few short days of pleasure,
The farewell to our native shore

As we stood on the rail of the trooper,
And sang you our last good-bye,
The nation stirred from slumber,
And saw with an open eye.

That a soldier is not a scoundrel,
Though he may be a scamp,
So they petted and pampered the fellows,
That followed US into camp.

There were parties and dances and evenings,
And all of a great to-do,
And rooms and homes to stay at,
And places to bill and coo.

While out in the dusty desert,
Half the world away,
Were the men who did the ground-work,
The boys who showed the way.

They read and their lips grew scornful,
Of the fuss you were making them,
And their hearts grew bitter with-in them,
The FIRST but forgotten men.

The papers were full of the doings,
Of the glorious Second and Third,
While out in the dusty desert,
Scarce a whisper or voice is heard.

Till at last a whisper stirred us,
A tale of deliberate lie,
Of the wives and debts behind us,
When we gave you our last good-bye.

It is easy enough to slander,
Sitting at home in style,
But hard as hell to bear it,
By the banks of the distant Nile. 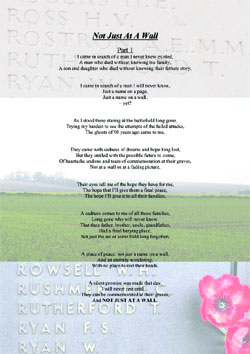 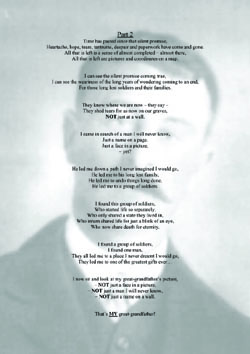