In 1999 while visiting my dad's family in New Zealand, I was handed a little piece of paper with Thomas Rutherford 5207 written on it. I I was asked to find out what I could about this man, though they didn't think I would find anything. He was my great-grandfather. I found out that he served in the 1st Battalion A.I.F and was killed in the early hours of November 5th 1916 near Gueudecourt, France during an attack launched by the 1st Battalion along with other Australian battalions. They attacked the Germans on the front line near Gueudecourt. After three failed attempts many men were lost and the attack was called off.

On November 5th 2006, while standing looking out over the fields exactly 90 years since Thomas died, I held a piece of paper in my hands from his Red Cross file that stated he was buried about 450 yards N.N.W of Gueudecourt, Sheet 57c.S.W.N.20.D.3.7. My dad and I realised on this trip that Thomas, like so many others, had no known grave. However, I did have the co-ordinates. When I got back to Australia I was determined to find his grave.

Through my searching I discovered that unfortunately the ground where most of the men laid was No Man's Land so their bodies weren't retrieved and buried until much later, in fact around four months later on March 3rd 1917. Most of the bodies were buried where they lay on the battlefield and a number of reports state that one cross was erected in the middle with all their names on it. There were 73 1st battalion soldiers (including Thomas) buried near Gueudecourt.

In July to October 1919 the army went over the battlefield and searched the coordinate given for the burials -- apart from those buried in the battlefield cemetery, the army stated that there were no obvious signs of burials so they moved on looking for others. So Thomas and 40 others were classed as soldiers with no known grave and their names were placed on the wall at Villers-Bretonneux to commemorate them. A few years later in the early 1920s two of the unknown grave soldiers were found in the surrounding area near the co-ordinates. After my research I found that 36 of these unknown grave men (including Thomas) were never moved from their initial burial in March 1917 near Geuedecourt.

I developed a website which includes the research I have undertaken and an online memorial with photographs of the soldiers and individual pages that contain various information about each of the 1st battalion soldiers that died on November 5th 1916. My main aim now is to provide the other families with what I found as most were left not knowing. I would love the families of these soldiers to learn more about these men's death and burial, my website is http://www.november5th1916.350.com/.

Photos, Location where Soldiers are buried, looking at site. 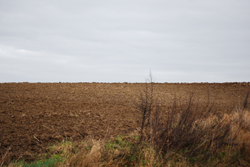 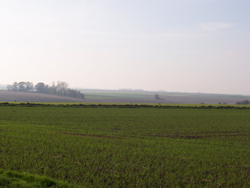